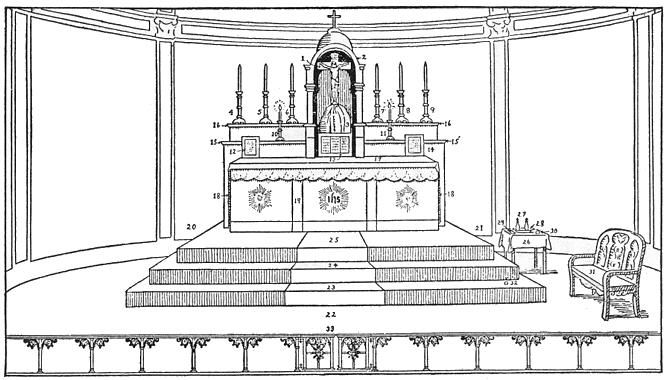 Observe well the picture of the altar and sanctuary.  It is here that the Holy Sacrifice of the Mass is offered up.
This picture shows everything that is necessary for Mass, and gives the proper name of the furniture of the sanctuary.

The Chalice and its Appurtenances 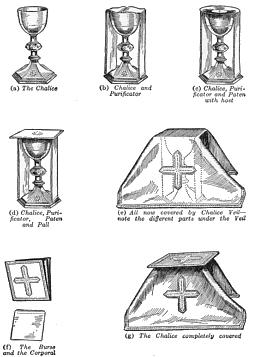 By Gods command the Jewish priests wore a distinctive garb when they ministered in the Temple.  The Bible tells us they were vested in violet and purple, scarlet twice dyed, and fine linen.  Gold and precious stones were also used to give the person of the priest that dignity demanded by his exalted office.

No special dress was at first prescribed for the Christian priesthood.  During the early days the garments worn at the Holy Sacrifice were not dissimilar in form to the clothing of civilians.  They were distinguished, however, from profane apparel in richness and beauty of decorations; and, of course, their use was restricted to divine worship.

Secular fashion changed, but the Church clung to the old style.  Thus it was that garments once common to all, presently became the privileged dress of the clergy.  Faith then saw in each particular vestment a symbol relating to the Passion of Our Lord, and a reminder of some Christian duty.

The Vestments Worn at Mass